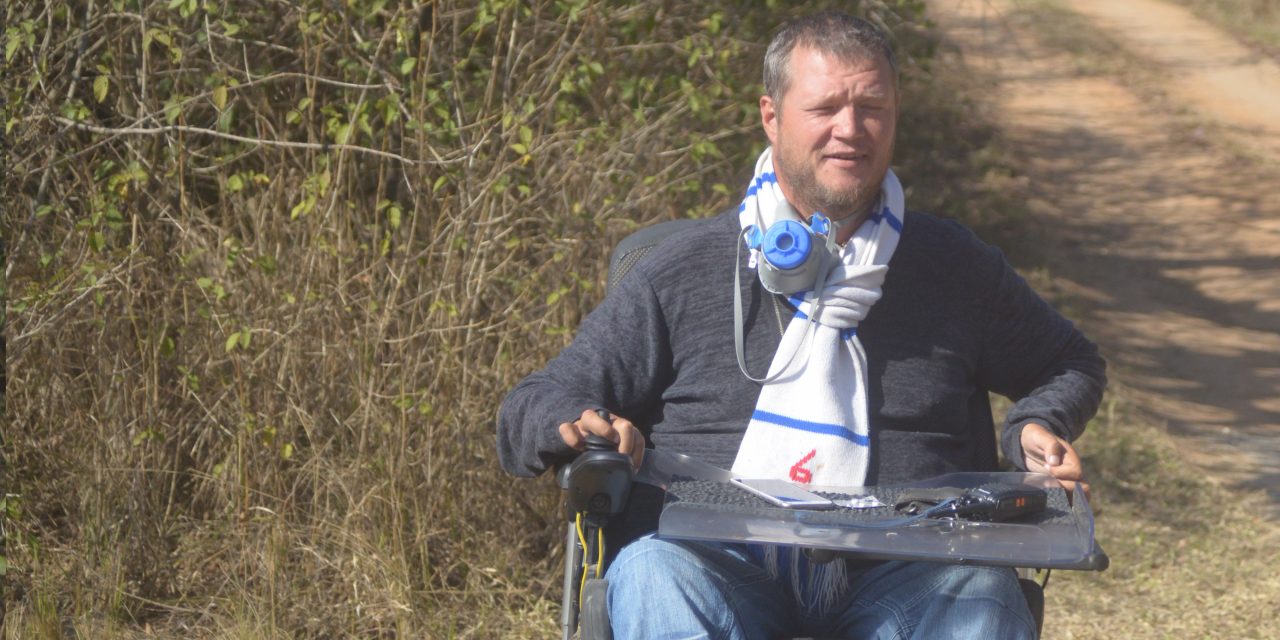 It is time for another Mopani Pharmacy Charity Challenge! Compete in this upcoming event by running or cycling on the road, on a trail or even indoors! Each kilometre completed will equal R1 donated by Mopani Pharmacy! Entry costs only R50, You can enter via this link. There are many fun prizes up for grabs!

Proceeds will be donated to Justin Ware

Justin started grade 8 at Lowveld High school in Nelspruit, in 1998, living in the hostel. He was a solid student with B-average grades, and a knack for sports. Justin loved rugby and swimming, in particular, as he got appointed as a reserve for the first rugby team and completed the Midmar Mile, an open water swimming contest. He was even popular, as he was crowned as second runner up for Mr Lowveld High, in grade 10.

He usually played as flanker, but on 27 May 2000, he was positioned as the hooker in a match against Ben Viljoen High.

Towards the end of the game, a scrum was called for.

“I was distracted, looking at the grand stand, thinking about how I would need to go to my locker for my keys after the game – I had to meet up with my date at the air show,” Justin recalled, “We were about to commence the scrum, crouch, hold, engage. As we engaged, I did not get my head down in time. My head collided with the opposing hooker’s shoulder. My neck broke.”

“Al I remember was seeing stars. I was conscious throughout the entire ordeal. It was an intense feeling of shock. I felt like I was standing up, but in reality, I was lying on the floor. I could see my arms and legs, but I could not move them,” he continued.

It took 15 minutes for the ambulance to arrive. He was taken to a private hospital in Nelspruit for immediate care. “My face was swollen immediately. A nurse was pinching me all over to see if she could get a reaction. They ran all the tests, x-rays and scans they could.”

Soon, his father realised that he needed some extensive medical attention and Justin was taken to Eugene Marais hospital in Pretoria. He was prepared for surgery immediately. After two and a half days in ICU, he started physiotherapy.

“It took me about a week and a half to just twitch an arm. It was certain, I was now a quadriplegic and my life would never be the same,” he said, “Upon returning home around August that year I finally understood how similar, yet, different it all was, and would be, going forward. Returning to school was not an option due how awkward it made things, especially with the background in sports. I mostly didn’t want to be pitied”, he continued.

Life after the accident

When Justin was 19 years old, his father decided to move out to the family farm. Justin wanted to be his own person and live his life to the best of his abilities.

He moved to Ashley Village in Pinetown, KwaZulu-Natal in 2002. “I arrived at Ashley Village a new person. I was able to continue my studies and find employment. After my first year there, I resigned to study business entrepreneurship for disabled people”, he recalled.

Soon after, he started an internet café with a friend, but it closed down, unfortunately. A little down on morale, they planned a trip to Victoria Falls in Zimbabwe, with a few friends. On this trip they stayed at a fishing village where he met Lenie.

“Lenie was a nice lady and she made me blush. Lenie and I kept in touch,” he recalled.

In 2006, Lenie moved to Durban and the pair started dating. By 2008, they were married. After a few years, circumstances prompted a move to Nelspruit.

“Lenie and I both took courses on tunnel farming, whilst looking into aquaponics and aquaculture. We stumbled upon some quails one day and decided to start farming quails. With just 27 quails to start with, we grew the business and the farm into the small-scale farm it is today”, he said.

Life as a Quadriplegic Farmer 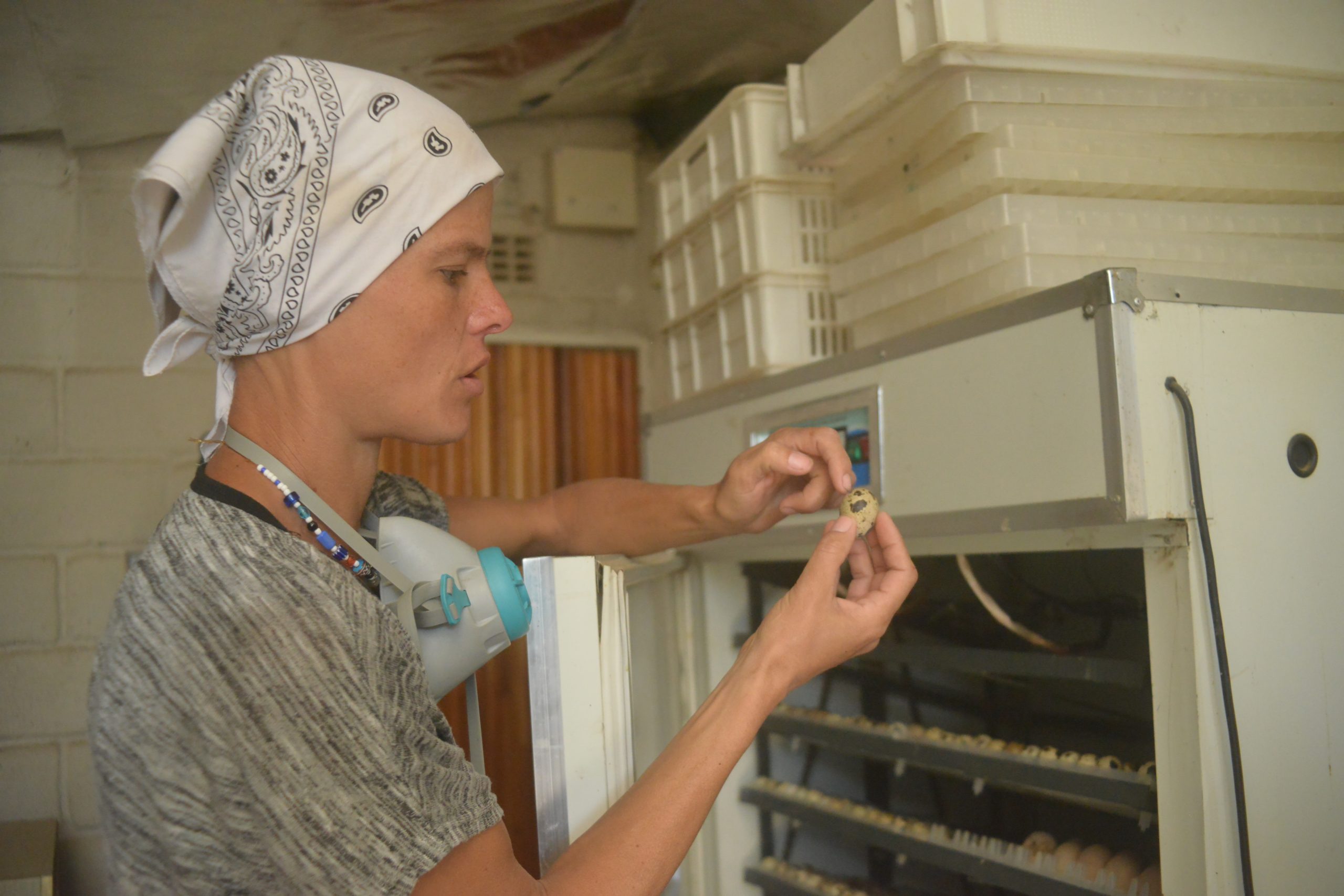 Lenie, showing off their quail egg-incubator

It is not as simple as an ‘all fits one’ scenario. Paralysis can come in a variety of forms. Spinal cord injuries are individual cases with their own unique challenges. “In my case, I had to overcome a complete cut of the cervical region in my spinal cord, C4/5. There are the obvious challenges, of having to come to terms with your new life and the way it must go forward. You start with the basics such as rehabilitation, which is only 3 months in South Africa”.

He is able to feed himself, and uses his thumbs or his knuckles to work his cell phone and other devices, “I prefer to send voice notes, or have people on loudspeaker, as my fine motor skills are non-existent.”

As Justin needs constant care, a home-based work situation is required. Lenie took on the physical labour where Justin manages the business side of things with the quail farm. Above and beyond her farming duties, Lenie acts as a caretaker to Justin as well.

Although they are able to live independently, there are still some obstacles. 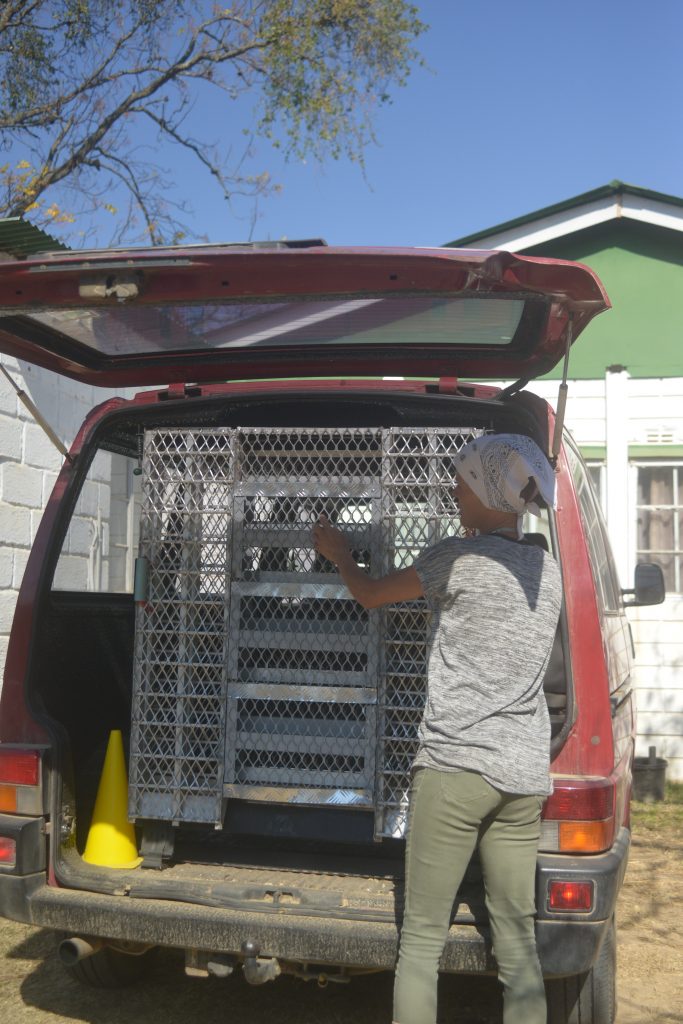 The ramp is quite large and very heavy – Lenie has to pull and push this ramp each time Justin gets into or out of the vehicle.

“Our vehicle is very old and heavy on petrol. The ramp alone weighs a lot and Lenie has to go through a lot of trouble to get it ready for me to enter and exit the vehicle. The large vehicle plus the extended ramp is a huge obstacle, as disabled parking is often not sufficient,” said Justin.

Another issue they have is their electricity expense on the farm. “We pay more than R5 per unit. Our quail eggs are in incubators. We use about 1000 units every month.”

The solution to this will be a solar system to sustain their electricity needs, as this would cut their costs significantly.

“There are many things we want to do here, to make it comfortable for Justin and to improve and grow our farm. But if we had to choose two things to get first, I’d say, a solar system, and a new vehicle with a better ramp,” said Lenie. 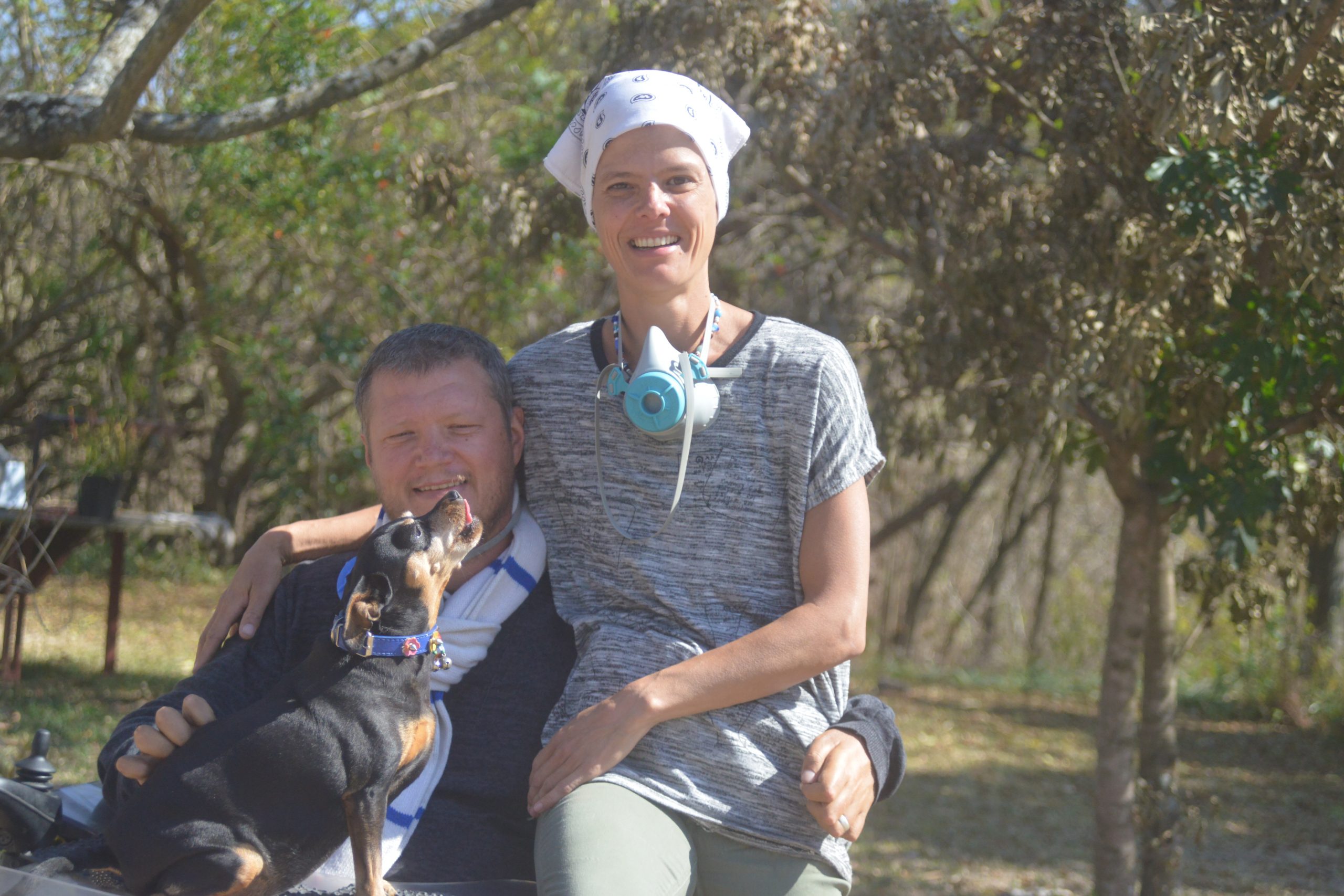 Justin, Lenie and their Fur-Baby, Pups.

Get ready for your challenge with all the necessary Sports Nutrition, available at Mopani Pharmacy, in-store and online! 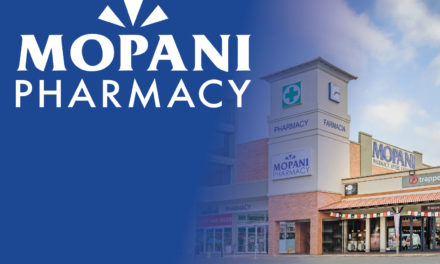 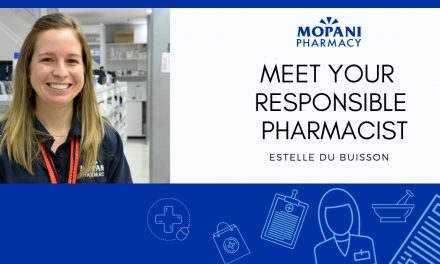 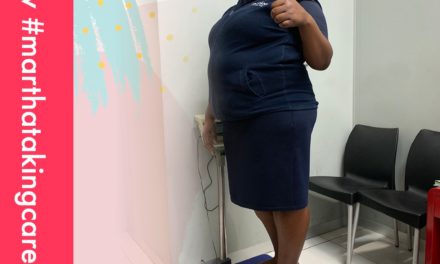 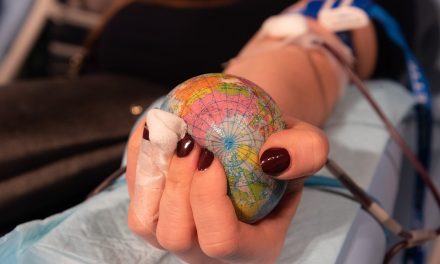 Being a hero is in your blood